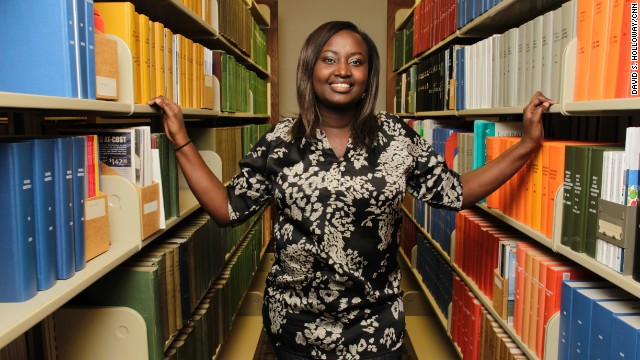 Mireille Kibibi is one of seven refugees graduating this year from Berry College in north Georgia.
May 21st, 2013
05:00 AM ET

Rome, Georgia (CNN) - Mireille Kibibi's march to the graduation stage at Berry College was tough - laden with the burdens of war.

As a little girl, she fled civil war in Burundi and escaped to neighboring Rwanda in 1994, the year of the genocide. In the chaos, she was separated from her mother, whom she has never seen again. Her father died a few years later.

Kibibi made it to the United States with her grandmother in 2005 and resumed school after missing fourth, fifth and eighth grades.

Now she was about to receive a bachelor's degree in accounting.

She felt all those things a college graduate feels: the relief that exams are over. The excitement of starting life in the real world. The joy of making your family proud.

But Kibibi's graduation was also filled with longing.

The rows and rows of folding chairs had been arranged on the south lawn days in advance. She wished her father and especially her grandmother could see her now, resplendent in the knee-length red dress she'd ordered on eBay. Her grandmother, who raised her, had died a while back.

"She's watching you," her friend Fatima Bostan-Ali reassured her.

Kibibi cherishes the support. She knows her friends understand. They are from Afghanistan and also have traveled uneasy paths to graduation day.