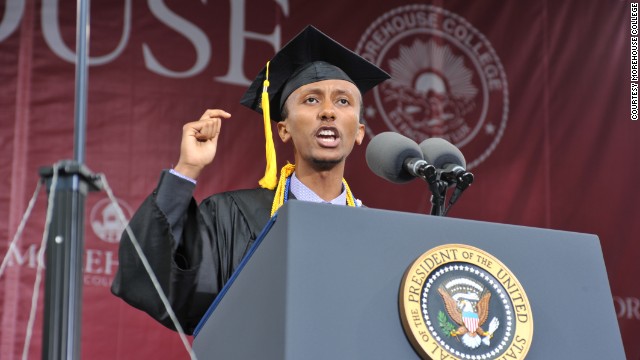 CNN: How did it feel to have President Obama talk about you during his commencement speech, and later receiving a standing ovation from him?

Tadele: That was really great! I heard him call me "the skinny guy with a funny name," and I knew I heard it somewhere and I later found out that he was comparing me to himself, which was great. Some people in the Ethiopian community who had not heard him use the phrase on himself before found it offensive. They thought that "skinny" was a reference to the Western image of Ethiopia as poverty-stricken country and "funny name" as a trivial jab at my Amharic name. In fact, it was getting so out of hand, that I actually had to clarify on Facebook where the reference came from.

Tadele: I do think the president was making a particular reference to the African-American experience, which is appropriate considering that he was the commencement speaker at a (historically black college or university.) However, more than that, he was speaking of the human experience. The struggle of fitting in a place that is new and strange is a common experience. As human beings, we fear the unknown. As long as there are people who deviate from the norm, there will always be people who discriminate against them. And thus discrimination is a universal experience.

When I first came to Morehouse, people thought I was not smart because of my strong English accent. As a native of Ethiopia, I have a very noticeable accent when I speak English, which leads a lot of Americans I meet to assume that I am not very smart. The cause for this assumption is simply the fact that experience and norm say that smart people's English sounds good. I had to prove myself. I can associate with a Morehouse man who might be stereotyped because of his color of skin.

CNN: Is it all work? What do you do for fun?

Tadele: Like most Ethiopians, I like to sit in Starbucks and have coffee, hang out with my friends. I was pretty involved in my church youth group until about a year ago. I spent a lot of time with them and that is a big part of who I am. I do spend a lot of time on computers. To me, computers are not work. I enjoy working on them. I don't see it as work at all, so that is fun for me.

CNN: Who or what inspires you?

Tadele: I have had many people who have served as my role-models, but none more than Jesus. Though I am a technically inclined person, I don't believe that I can have a meaningful life through my technical skills. I think, more importantly, my character and who I am as a person has a lot more to do with how meaningful my life is. And for this, the best example I have is Jesus.

He inspires me to work harder every day to prioritize people over my work. I try every day to shape my character like him. It is this attitude that enabled him to change the world.