Some types of TV might improve behavior in kids

(CNN) - For years, pediatricians have recommended that young children watch no TV, or as little as possible, because it can lead to problems in school and behavior issues.  Now a new study concedes children are sitting in front of the TV a lot longer.  However, controlling what they watch can improve how they behave.

When preschoolers watch educational programs instead of violent TV shows, they tend to be more compassionate and less aggressive, according to a study published Monday in the journal Pediatrics.

About 600 families were recruited and assigned to one of two groups. Parents in the first group were encouraged to substitute violent shows with educational and pro-social ones – shows that stressed compassion and cooperation.

Families were given monthly TV guides listing educational programming for their area: shows such as "Dora the Explorer," "Super WHY," "Sesame Street" and "It's a Big, Big World." Parents were also encouraged to watch TV with their kids.

The children went from watching a half-hour of violent programming a day to 23 minutes. Parents then increased educational viewing from about 30 to 43 minutes a day.

Families in the second group did not change their viewing habits.

"This is the first study to try to modify the viewing habits of preschool kids," says Dr. Vic Strasburger, spokesperson for the American Academy of Pediatrics. "That's one of the significances of this study."

After a year, researchers found that children watching less violent and more child-appropriate shows scored better on tests that measured cooperation, a willingness to share or compromise. They also had fewer incidents of aggressive behavior such as yelling and hitting. 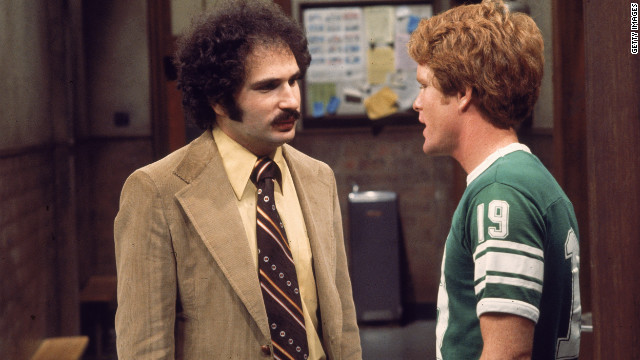 (CNN) – Teachers play a tremendous role in shaping how we view the world. But who – or what – shapes our view of teachers? For me, and I’m guessing for many of us, the answer is entertainment.

We may spend years in the classroom with real-life teachers and professors, but the hopes and aspirations we assign to them are just as likely to come from their fictional counterparts.

To that end, the Schools of Thought blog has put together a list of some of our favorite TV teachers. This is by no means a complete list, nor a ranking, and we’re sticking strictly to television teachers (sorry, Principal Skinner and Coach Reeves).

Gabe Kotter (Gabe Kaplan), “Welcome Back, Kotter”
Gabe Kotter returned to his alma mater in Brooklyn, taking on the task of teaching the Sweathogs, a group of remedial students. Kotter refused to accept that his students were destined to be underachievers, especially since he was part of that same group when he was in high school. His faith in their potential made believers out of the Sweathogs themselves, and prepared them for a brighter future.

Charlie Moore (Howard Hesseman), “Head of the Class”
Mr. Moore walked into almost the exact opposite situation from Mr. Kotter. Initially a substitute teacher assigned to a class of gifted students, Moore didn’t need to push his charges to focus on academics. Rather, he inspired them to recognize that life isn’t found solely in textbooks, and he encouraged them to pursue and celebrate other aspects of life, helping them navigate the often emotional perils of high school life.
END_OF_DOCUMENT_TOKEN_TO_BE_REPLACED