My View: Why I won't break up a school fight

Editor's note: Robyn Barberry teaches English and drama at a Maryland high school. With her husband, she manages Legends of the Fog, a haunted attraction with more than 200 teen volunteers. She has a Master of Fine Arts in creative nonfiction from Goucher College and blogs about motherhood for The Catholic Review.

(CNN) - In Florida, a 64-year-old bus driver has been criticized for failing to physically intervene in a three-on-one fight that took place in July. The bus driver says he was afraid to step in. As a high school teacher, I can't blame him.

The adults who work in public schools are outnumbered. When a violent, hormone-fueled scene unfolds, it's our duty to quell the calamity with every resource we have in the name of safety. But where do we draw the line?

Early in my teaching career, I was afraid of some of the bigger boys at school, especially one. I could see he carried a great deal of hatred inside - for me, for his classmates, for the world. He was tall and muscular; he could have been an athlete, but his poor grades, bad attitude and spotty record kept him from playing sports.

One afternoon, as I waited outside my classroom door, I heard a scuffle behind me. The boy I feared and another, smaller boy were shoving each other by my white board. I stepped in, and told them to stop. When they didn't, I shouted louder and told another student, my go-to helper, to get another teacher. As the shoves turned to punches, rage grew in the larger boy's eyes. The other student asked him to stop, but he had thrust his hands around his neck. I tried to pull him free, but the large boy shoved, pressing the other student and my arm against the cinder block wall. I felt trapped and frightened, and thought I might black out. Just then, two male teachers pulled the boys apart and dragged them to the office.

My wrist was red and swollen. It hurt, but not as much as knowing I wasn't safe in my own classroom. My neighbor teacher took over my class so that I could go to the office to fill out an incident report. I could barely grip the pen. Two police officers assigned to our school urged me to file assault charges against the boys, but I insisted they just hadn't seen me. I wanted to believe that they wouldn't hurt me, but I also wondered if the boy would retaliate if the law got involved.

Fortunately, my wrist was only sprained and I returned to work the next day in a cumbersome brace. But I kept wondering, what if the boy had pushed the other one harder? What if his anger was directed at me? Suppose it was my head that was smashed against that cinderblock wall? What if he'd had a weapon?

On the other side, what if adrenaline gave me undiscovered strength and I had hurt one of them? Could their parents sue me? Would I lose my job? 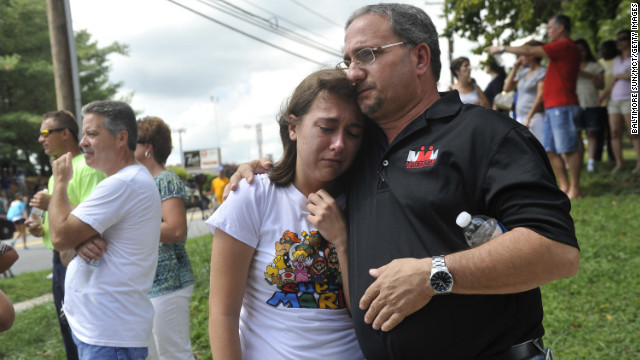 Julianna DiPaula hugs her dad John DiPaula after they are reunited following a school shooting in Perry Hall, Maryland.
September 21st, 2012
04:01 AM ET

(CNN) – On the first day of classes late last month, I kissed my little boys goodbye and updated my Facebook status: “Wishing all my teacher friends a happy new school year!” I rushed to my classroom at an alternative high school near my home outside of Baltimore. When I turned on the LCD projector, a soft glow of dust-speckled light hit the stark white screen, and displayed the words “Welcome back!” I was prepared for everything except what happened.

When I was leaving the office, the school resource officer stopped me.

“There was a school shooting today...in Perry Hall,” he told me.

I must have stared at him for an entire minute before I could speak.

Shootings didn’t happen anywhere on the first day of school. Certainly not in Perry Hall.

The officer was armed with a badge, combat training and a service weapon, and he wasn’t prepared for this, either. He said a lone gunman had shot one person in the back, and that he’d already been apprehended. There was no word on the victim’s condition.

This wasn’t the way the first day of school is supposed to be. The beginning of a new academic year offers a clean slate for teachers and students alike. We debut new, improved versions of ourselves. “This year we will shine,” we convince each other. Dreams like this are never deferred by the crack of a shotgun across a school cafeteria on the first day of school.