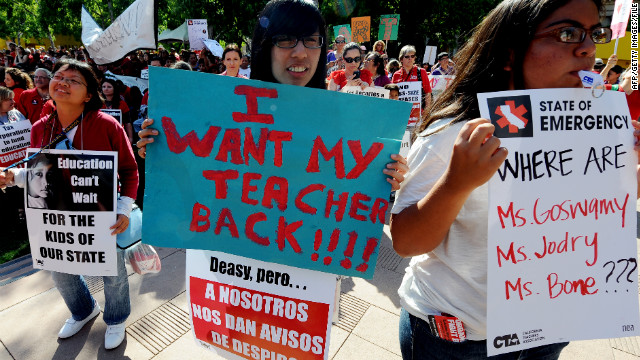 END_OF_DOCUMENT_TOKEN_TO_BE_REPLACED

(CNN) – The president of Florida A&M University has resigned, more than a month after the school's board of trustees gave him a vote of no confidence in the wake of last year's hazing death of a school band member, his office said Wednesday.

The president, James Ammons, was given the no-confidence vote June 7 after investigations into the university amid concerns over the November death of drum major Robert Champion.

Champion, 26, died after the initiation ritual aboard a bus. The Orange County medical examiner said the cause was "hemorrhagic shock due to soft tissue hemorrhage, due to blunt force trauma."

The medical examiner ruled the death a homicide, prompting a police investigation and renewed public scrutiny of hazing in the university's famed Marching 100 band, which got its name in 1950 and actually has about 400 members.

(CNN) - Four middle school students caught on camera verbally abusing their bus monitor have been suspended for a year and will be required to complete 50 hours of community service, school district officials said Friday.

Recorded by a student with a cell phone camera on what was the second-to-last day of school, the brazen bullying went viral and spurred international outrage.

The incident occurred in Greece, New York, near Rochester.

"Following individual meetings this week with school and district administrators, each family waived their right to a hearing and agreed to one-year suspensions from school and regular bus transportation," the Greece Central School District said in a statement.

The students will be transferred to the district Reengagement Center, it said. Each will also be required to complete 50 hours of community service with senior citizens and must take part in a formal bullying prevention program. 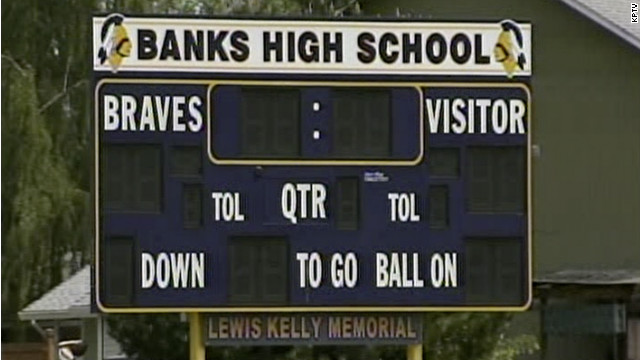 The Oregon Board of Education has voted to ban Native American mascots at schools across Oregon.
May 18th, 2012
09:54 PM ET

(CNN) - Public schools in Oregon must discontinue the use of Native American names, symbols or images as mascots following a State Board of Education vote.

Prohibited names include, "Redskins," "Savages," "Indians," "Indianettes," "Chiefs" and "Braves," the board said in a statement Thursday.

The board by a 5-1 vote adopted the rule and gave schools until July 2017 to comply.

"I do not believe any of our schools with Native American mascots intended to be disrespectful," state Superintendent Susan Castillo said in a statement. "Our role as educators needs to be to create a safe, supportive, and welcoming environment for all of our students — an environment which honors them for who they are as individuals with a rich and varied cultural history. We can no longer accept these stereotypical images for the sake of tradition — not when they are hurting our kids." 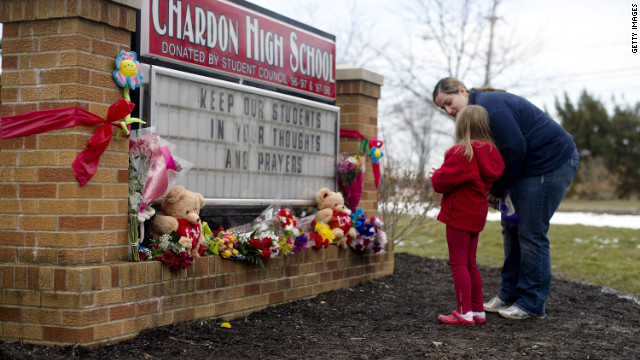 Angela May and her daughter, Eleanore, 5, of Chardon place flowers on the sign outside Chardon High School.
March 2nd, 2012
09:37 AM ET

Ohio high schoolers head back to class after fatal shooting

(CNN) - Students at Ohio's Chardon High School prepared to head back to class Friday for the first time since a gunman walked into the school's cafeteria and killed three teenagers.

Two other students were hospitalized and another was grazed by gunfire Monday morning.

The person who authorities say is responsible, 17-year-old T.J. Lane, was charged Thursday afternoon with three counts of aggravated murder, two of attempted aggravated murder and one of felonious assault, the latter related to an individual who was "nicked in the ear" by a bullet, according to Geauga County Prosecuting Attorney David Joyce.

Some students were with their parents in the school, situated in a community of about 5,100 people some 30 miles east of Cleveland, on Thursday and counseling has been made available at various locales since the shooting.