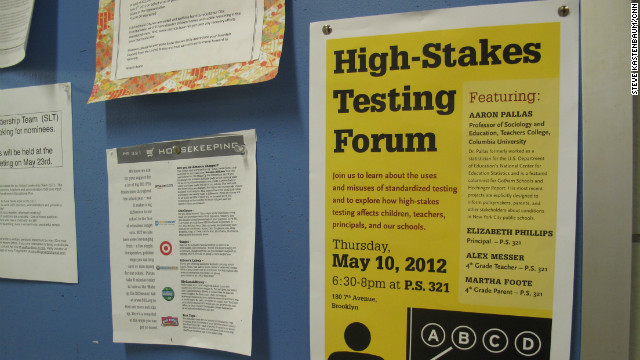 A sign on a bulletin board at P.S. 321 in Brooklyn, New York alerts parents and teachers about a forum on high-stakes standardized testing.
May 17th, 2012
06:29 AM ET

The high stakes of standardized tests

(CNN) Standardized tests are nothing new in public schools. Chances are you filled out bubbles on an answer form at some point during your schooling. But for the past few years, scores from statewide tests in English and math have been used to determine which schools are doing a good job of educating students and which are “failing.”

Today, the test results count for more than just a letter grade for a school. Teachers in some states are now being labeled good or bad based on their students’ scores.

Welcome to the world of high-stakes standardized testing.

“I find it the most absurd thing in the world. I don’t know anyone who thinks they’re valid,” said Principal Anna Allanbrook at Public School 146 in Brooklyn, New York. “So the morale is down because teachers are worried that people who don’t really know their work will make decisions about their jobs.”

Standardized tests have long been used as one measure of a student’s progress in core subjects. But now, federal funding hinges on test results. It started with President Bush’s No Child Left Behind Act, which requires states to rate schools based on test results in order to receive federal funds.

President Obama’s administration then dangled an additional $4.3 billion dollars in front of school administrators in a competition called Race to the Top. In order to qualify for multi-million dollar grants, U.S. Department of Education spokesman Peter Cunningham said, states had to include test results in the process of identifying good and bad teachers.

“Some of those testing results need to be used to help identify schools that are struggling so that we can give them additional interventions, but they also need to be part of how we evaluate teachers,” said Cunningham.

Across the country, teachers, principals and parents are pushing back against the test results carrying so much weight. More than 1,400 New York principals signed onto a letter to the state education commissioner that said the tests are deeply flawed. The outgoing Education Commissioner in Texas called standardized testing “the heart of the vampire.” Jenny LaCoste-Caputo of the Texas Association of School Administrators said, “This one test has become the single measure for a student’s success, for a school’s success, and that’s what is absolutely wrong.”
END_OF_DOCUMENT_TOKEN_TO_BE_REPLACED

The New York City Department of Education and the City University of New York have partnered with IBM to create a 6-year technology high school in Brooklyn known as P-Tech.
January 23rd, 2012
07:45 AM ET

Listen to CNN Radio's podcast on P-Tech from Steve Kastenbaum.

(CNN) IBM’s job listings website today shows more than 1,600 job vacancies in the United States. But despite the nation’s high unemployment rate, IBM executives say they have a hard time filling those positions because few candidates have the backgrounds in math and science to qualify.

IBM hopes to change that by fostering future employees among high school students.

The company’s plan centers around a partnership with the New York City Department of Education and the City University of New York (CUNY). The result is Pathways in Technology Early College High School in Brooklyn– “P-Tech” for short.

P-Tech goes two years beyond the 12th grade and every high school graduate will, in theory, also receive an associate’s degree from a nearby technical college. The school focuses on giving students a strong foundation in math and the sciences so they’ll be qualified for jobs in the tech industry when they graduate.
END_OF_DOCUMENT_TOKEN_TO_BE_REPLACED

While Coney Island Prep is housed in a traditional school building, the similarities between the middle school and other public schools end at the door.
END_OF_DOCUMENT_TOKEN_TO_BE_REPLACED